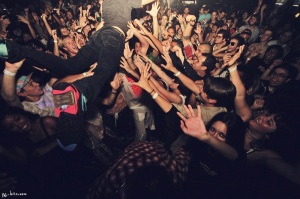 “A creator, such as an artist, musician, photographer, craftsperson, performer, animator, designer, videomaker, or author – in other words, anyone producing works of art – needs to acquire only 1,000 True Fans to make a living.” – Kevin Kelly

This article , or rather approach to making a living off your art, was first suggested to me at a workshop by Ill Gates and I have since seen it recommended by other powerhouses such as Seth Godin and Tim Ferris. I personally find it inspiring; the concept of creating “1000 True Fans ” takes a loose goal such as “making a living off of music” and makes it tangible and totally possible with the right efforts. In order to discuss Kevin Kelly’s idea, we first need to take a quick look at another concept called “the long tail”: 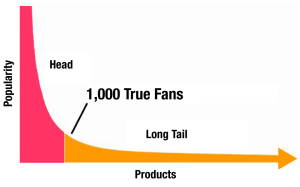 In brief, the long tail describes how on a continuum – there are a few extremely popular artists or items that sell very well (left hand or “head” of the chart) and then gradually moves towards an ever-increasing number of artists that sell less and less (right hand or “tail” of the chart). Generally the long tail works well for aggragators (such as Beatport, Netflix, or Amazon) that sell high numbers of many things, and can be frustrating for artists further to the right that are now surrounded by more and more competition.

The point of the 1000 true fans model is to find the sweet spot, where you don’t need a massive hit, but instead build and maintain enough relationships with real supporters that will consistently and enthusiastically pay you to make sure you  keep doing what you’re doing – making for music them that they love.

“If an artist can cultivate a base of just 1,000 fans who are radically committed to his work, those fans will provide enough income to support that artist. The theory goes that each ‘true fan’ will spend on average about $100 per year on the artist. That adds up to an annual revenue stream of $100,000. Even after expenses that should be enough for any individual artist to live comfortably.” – Refe Tuma

Some of the main points include:

It may seem to you that as a new or upcoming artist that this is a long shot, but chances are you already have a few true fans. There is likely already a handful of people that will show up to your events, buy your tracks, or at very least – listen to your new material if you are just learning. It is a matter of consistently growing, expanding your fan base, and doing something excellent and worth talking about.

It is highly recommended you read the full article!

Tags: 1000 true fans, how to make a living off your music, Kevin Kelly, The Long Tail